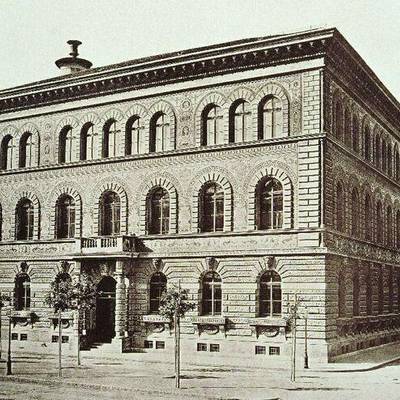 The history of the university is an integral part of what MOME is today. It contributes to the institution’s identity of today and to the future where it’s headed. It is the past that allows MOME to think of itself as a creative and intellectual place where the university’s alumnus and eponymus László Moholy-Nagy has embarked on his creative journey and where Ernő Rubik (inventor of Rubik’s Cube) has had his first experiments with spatial art.


The training began at the Hungarian Royal National School of Arts and Crafts on November 14, 1880, in the building of the Old Music Academy of Andrássy Street with a single department of carving. Responding to the technological innovations of the time and social demands, this was soon followed by the launch of new sections: goldsmithing, wood-carving, decorative painting, copper engraving and different sub-fields of sculpture. This marked the beginning of the process of transforming the former school into a college, a college into a university, and as of today into a prominent centre for contemporary art and design in Hungary.

Despite the adversities of the two world wars, the school’s educational structure and its training portfolio continued to expand, which in 1948 led to the school to become a college. More and more students became interested in the institution, so in 1954 part of the establishment moved to the Zugligeti Road building designed by Zoltán Farkasdy. In the 1960s, the name changed into College of Applied Arts and by this time there was a total of 14 specialties at the different departments. Soon enough postgraduate education was also introduced with the creation of a two years advanced training.

Still in the 1960s, the establishment continued to grow its educational profile, which until then was primarily focused on the design of objects and buildings, with creating a typo-graphic department. This period was characterized by the advancement of visual communication, and by the growing number of the school’s international contacts, both supporting the improvement. The work of the institution was recognized by many international professional organizations. As a result of its successful operation, the college became a university in 1971.

In 1983, the university’s leadership introduced a major educational reform: from then, the first two semesters’ introductory education consisted of general theoretical moduls, drawing, form and material studies and creative projects. Students who passed these, had the chance to choose between two specializations. After graduating from the first cycle, students were able to carry on with their studies at a university-level master’s degree. In the early 1980s, the training of graphic design, photography, and video and animation began. In 1986, the University of Applied Arts was the first and only public institution of Hungary that provided a management diploma. To carry out the tasks of teacher training, the Center for Visual Education was soon set up.

The change of regime in 1989 has made it possible for the university to grant students foreign scholarships for that they could gain a broader and more open professional experience. From January 1, 2000, the name of the institution officially became the Hungarian University of Applied Arts. At the same time the Doctoral School opened its doors as well, offering the possibility of obtaining postgraduate degree in art.

In 2005, the Senate of the institution decided that the Hungarian University of Applied Arts should take the name of László Moholy-Nagy. It was from March 30, 2006, that Moholy-Nagy University of Art and Design (MOME) became the official name of the school.

We use cookies and other technologies that store data on your device to keep the site reliable and secure, tailor your experience and analyze site usage.

In order to allow this page to operate correctly, we may:

store a randomly generated session ID, so that you are able to sign in and stay signed in while you are submitting your data.
store your country and locale preferences in order to ensure that you will see the correct application requirements, deadlines and other information.
store your layout choices, for example if you have hidden the sidebar or collapsed the menu.
store your wishlist items until you sign in (this is an optional feature).
finally, we will store the choice you have made in this dialog with regard to cookies.
more information

You can allow or disallow metrics and analytics cookies to assist in our marketing efforts, including identifying the sources of traffic to the site.

Save my preferences
If nothing else matches:
choose
Why do we ask this?

We tried to guess your citizenship based on your current location. In case we are wrong, please correct it, so that you will see deadlines and requirements that apply specifically to you.